Will Arizona Green Party lose ballot access at the end of 2019? 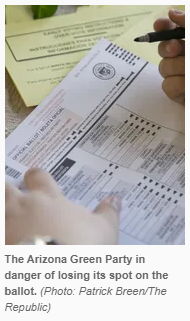 The article published on Sept 20, 2019 in AZCENTRAL, by Andrew Oxford iterates the challenges to maintaining Green Party ballot access for 2020 in Arizona.

"Greens in Arizona are scrambling to keep their status as a recognized political party in 2020 after state lawmakers moved up the deadline for them to submit tens of thousands of signatures.

The Greens and any other party aiming for recognized status must now file at least 31,686 signatures by Nov. 28, instead of the previous deadline that was in February — 70 days later.

The new deadline is one of the earliest of its kind in the country, according to Richard Winger, editor of the San Francisco-based newsletter Ballot Access News.

Losing 70 days to gather signatures has been a hardship, said Liana West, secretary of the Arizona Green Party.

"It makes us feel like we are being targeted," West said."

Want to help keep democracy alive? Do you want to see Green party candidates on your 2020 ballot? It is easy to volunteer! Click on the Ballot Access 2020 here and download the New Party Petition form (directions included). Ask your friends and neighbors who are registered to vote to sign along with you. Mail the petition forms to the AZGP P.O. Box.

AZGP is offering fair compensation for your time and efforts. Read on to see how that works... 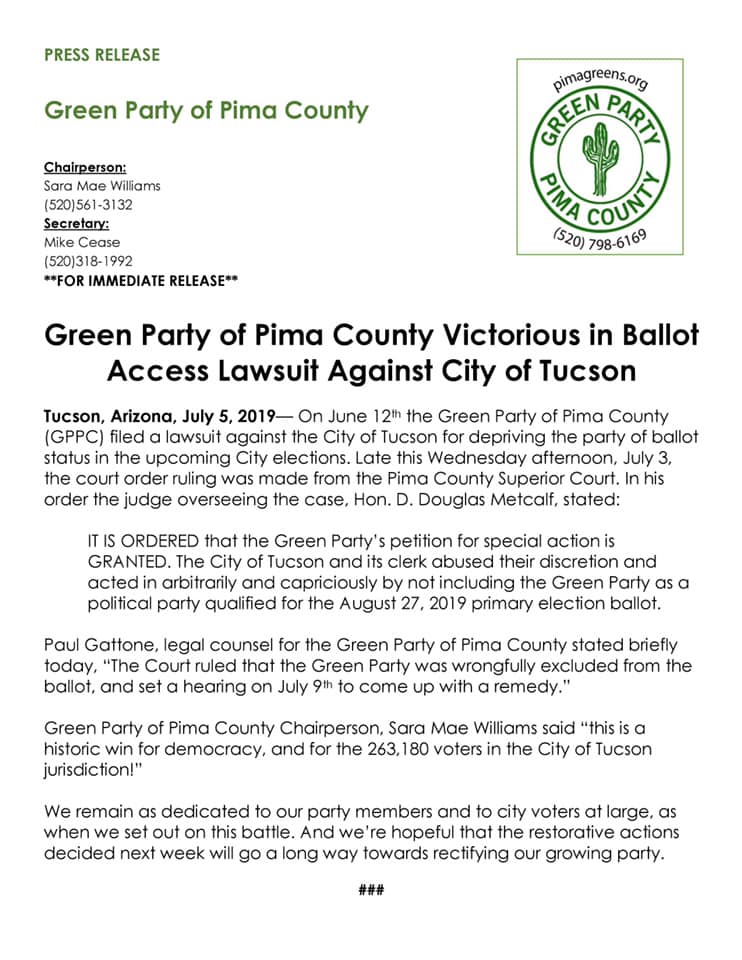 "TUCSON- The city of Tucson is facing a lawsuit from the Pima County Green Party. The lawsuit claims the Green Party of Pima County was illegally removed from the 2019 primary ballot.

On Monday, July 1 a hearing in Superior Court was held. The judge is set to decide in the next few days if the Green Party should be allowed on the 2019 ballot."

Read the whole article and watch the video: 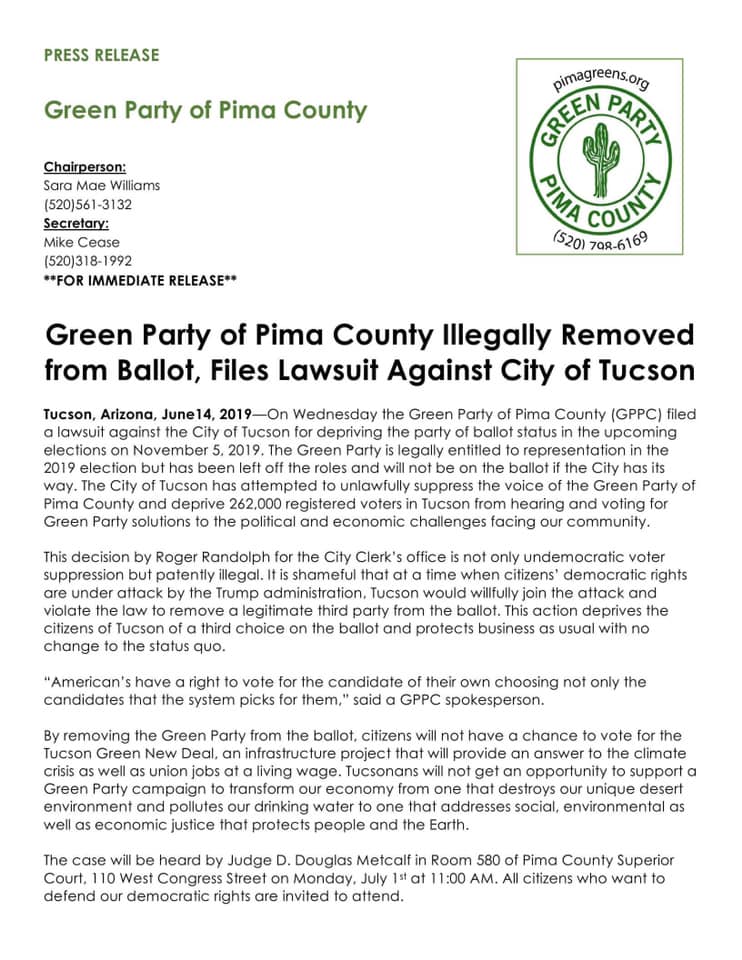 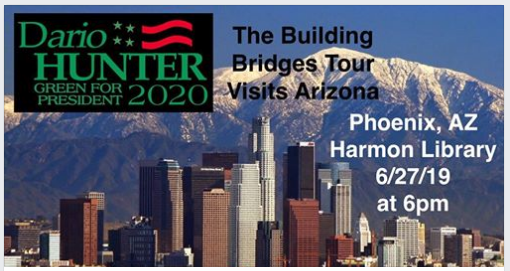 Dario Hunter, Green Presidential candidate and member of the Youngstown, OH Bd. of Ed., visits Phoenix, AZ to talk about his plan to build a greener and fairer America as well as the strategy to grow the Green Party through the 2020 race and beyond.

(Disclaimer: This event is not sponsored or endorsed by the Phoenix Public Library.)

Biography
Dario Hunter was elected to the Youngstown Board of Education (Youngstown, OH) in 2015. In his time on the board, he has called attention to issues of financial mismanagement, curricular deficiencies, failures in special education and the democratic deficit caused by the state takeover.

He has also been vocal and active in pushing for anti-fracking measures, speaking out against local corruption and defending the public’s right to know through his public records lawsuits and his local TV public affairs show, The Dario Hunter Show.

He currently serves as a Delegate to the Green Party National Committee and a member of the Green Party’s Peace Action Committee – both on behalf of the Lavender Caucus (the LGBTQIA caucus).

Ordained as a rabbi in 2012 by Jewish Spiritual Leaders Institute (JSLI), he serves as the Coordinator for Jewish Life and Intersectional Programming at the College of Wooster (Wooster, OH) and as rabbi at Ohev Tzedek - Shaarei Torah in Boardman, OH. He also serves as a volunteer rabbi at Ohio State Penitentiary.

Hunter was raised in New Jersey by an African-American Christian mother and an Iranian Muslim father. He has previously practiced law in Canada and in Israel. His diverse background fuels his personal passion for outreach, interfaith dialogue, and increasing religious and cultural understanding.
Read more
Share