The Arizona Green Party State Committee has approved the canvass results of the AZGP online Ranked Choice Voting Presidential Preference Primary which was conducted from April 1st thru May 23rd. 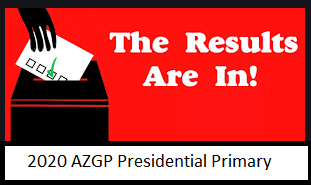 Three voters neglected to add the name of their Write-In choice, and so 6 points went into a “No Name” category.

The following two individuals were written in, however they were not eligible for a Write-In vote with AZGP during the 2020 Presidential Primary.

The Arizona Green Party State Committee has adopted the following recommendation for delegate apportionment for the State of Arizona to the July 11th Green Party National Presidential Nominating Convention:

Here is the math that supports this recommendation:

Total points of 716 divided by 6 (the total number of delegates from Arizona) equals 119.3.

The delegate apportionment results were approved by consensus on July 2, 2020.